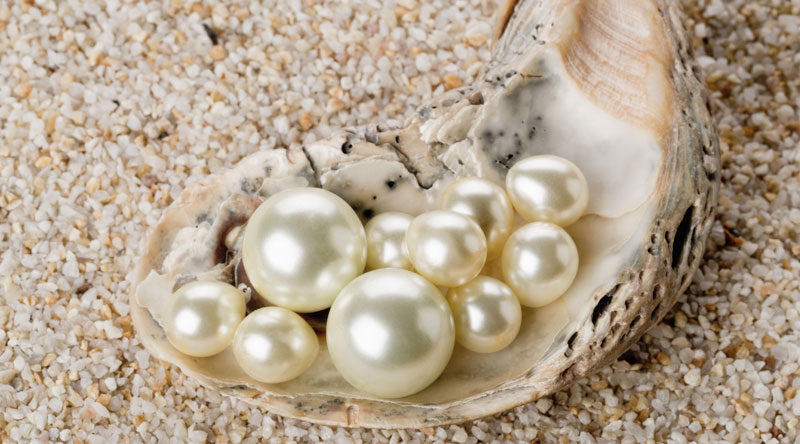 The mystery of pearls has preoccupied man since the very beginning of civilization, because this beautiful gem occurs in water, unlike other precious stones. They are organic, and not mined from the earth. They are formed inside oysters and mussels (mollusks) in all types of waters – from deep to shallow, salt to fresh, from the deep oceans to river beds. Whether from a grain of sand to an implanted nucleus, Mother Nature takes over the process in a very natural way, and rare beauty is born!

Pearls are reputed to symbolize everything from virtue to chastity, purity, and wisdom. Mystical healing powers have also been attributed to them. It is believed that Roman women slept with their pearls to sweeten dreams, and it was also during these times that they embroidered them into their clothing and upholstery. Ancient Asian cultures even used them to cure ailments and disease. Europeans believed that whole or powdered pearl if swallowed, could cure matters of the heart and mind, as well as bolstering nerves, and pearls were seen as a sign of power, wealth, and distinction.

Pearls are the result of an incredibly natural process that occurs within an oyster’s shell, in which some kind of irritant is introduced into the oyster’s shell. In response to the invasion as a means of self-preservation, the oyster emits a chemical that coats the object with nacre, a smooth, crystalline substance that surrounds the object and forms layers to protect the oyster’s inner tissue (called the mantle) from further irritation. The result of this process reveals a beautifully luminescent gem that we know as a pearl.
Traditionally, the only way to bring these pearls to the surface is by diving for the oysters, opening the shells, and removing the pearl from the shell, if there was one present in all. The problem with this process, is that many of the divers are seriously injured or perish in the attempt to retrieve the pearls, and many of the oysters are destroyed, whether or not a pearl is present.
Because of the intense demand for pearls, most oyster beds were bought to the brink of extinction! In the case where a pearl is produced by chance from a grain of sand or coral, the pearl is deemed a natural pearl. In rare cases, natural pearls are found in very old jewelry and fetch large sums of money. Their natural origin can be confirmed by taking an x-ray of the nucleus of the pearl.
In the early part of the twentieth century, a pearl farmer, by the name of Kichimatsu Mikimoto, developed a method to assist the oysters. He learned that by removing the oysters from the water, implanting one or several irritants (cut from pieces of a Mississippi River mollusk’s outer shell), man can induce the oyster’s secretion that produces layers of nacre. Then the oysters are replaced in cages and suspended them from rafts, where they hang until they are harvested. This process allows pearl manufacturers to mass-produce pearls in larger quantities than were readily available before. When man aides the production process in this way, pearls are considered cultured pearls.
Because pearls are organic in nature, they are affected by climatic conditions surrounding their environment, such as the saline content, water temperature, pollutants, etc. In Japan, where the water is cold, the growing cycle usually takes five to seven years. In the South Pacific, where water is much warmer, the growth period is much shorter. In freshwater beds, the cycle is usually three to five years. Generally, the longer the pearl grows, the larger and more lustrous it gets.
Virtually all pearls sold today are cultured pearls. The largest numbers of pearls are harvested from China, Japan, Sri Lanka, the Philippines, the South Pacific, Australia, and the Red Sea.
Because of the iridescent quality of the shell interior, the oyster shell is cut, shaped to a form, polished, and placed as an ornament on a piece of jewelry or a loose strand. This is known as mother-of-pearl and is derived for the oyster shell itself. It is available in a variety of colors but is generally variations of white or gray.

Unlike diamond grading, which uses the 4 Cs to determine value, there is no universal standard system for quality grading pearls. However, there are several characteristics that do affect their value, which should be considered before making a purchase.

Akoya – These cultured saltwater pearls are usually found around the islands of Japan, and are considered among the finest in the world.
South Sea or Tahitian – These large pearls are cultured from specific species of oysters in saltwater areas and can be white, silver, gray, golden, brown, or black. The black variety is often called Tahitian pearls.
South Sea Keshi – These irregularly shaped pearls actually grow alongside cultivated pearls. They are formed when the implanted nucleus is expelled and is grown around the remaining shell tissue. Composed primarily of nacre, these pearls grow unexpectedly inside the mollusk.
Freshwater – Originally these pearls were known for their irregular shapes, but with improved technology, they are being cultivated with a much higher degree of roundness. These are grown in mollusks found in freshwater lakes and river beds.
Mabé  (pronounced mah-BEE) or Blister Pearls – These pearls have a hemispherical shape that is formed by the nucleus being placed against the inside of the oyster’s shell.
Simulated or imitation pearls – These are completely man-made (usually of glass or plastic coated with lacquer or fish scales to make them iridescent) and are not cultivated inside a mollusk or oyster. Majorca is a well-known center for the production of imitation pearls. Although there are some good imitation pearls available, few possess the luster and orient of natural cultured pearls. A simple test reveals whether or not a pearl is genuine: If one rubs a pearl against the surface of his tooth, a genuine one feels gritty, while an imitation feels smooth.
Dyed or Tinted Pearls – These are white pearls that are artificially colored by a coloring agent that permeates the porous surface of the pearl. This technique is often used in trying to simulate dark colors, such as black, blue, and gray.

Conch Pearl – This Caribbean mollusk-made gem bears very little resemblance to other pearls, other than the fact that is born in a shell and it is derived from a snail shell rather than an oyster shell. Most often, it is found in a variety of shades of pinks from deep rose (in smaller sizes) or salmon-orange to eye shadow pink. They are prized for a “flame structure”, which may be described as appearing like pink velvet with delicate white wavy lines.

Caring for Your Pearls
Since pearls are softer than other gems, they require great care. Avoid contact with perfumes, cosmetics, hairspray, etc. Do not clean them using mechanical/ultrasonic jewelry cleaners, heat, chemicals, or detergents; they should only be wiped with a soft cloth or washed in mild soapy water. If you wear your pearls frequently, think about having them restrung every year. Fine quality pearls, if properly cared for, can last for generations. Because they are organic, they do discolor (yellow) with age.